Honey’s Potential To Save Lives By Destroying Harmful Fungus

The healing powers of honey have been known for thousands of years. Now a graduate from The University of Manchester has discovered a powerful link between a medicinal type of honey and the destruction of a fungus that can cause blindness or even death.

In the first study of its kind, student Zain Habib Alhindi used different concentrations of Surgihoney, a biologically engineered honey that produces chemically reactive molecules containing oxygen, to test how effective it could be in destroying the fungus Fusarium, which is found on plants and in soil and can cause devastating infections in vulnerable people.

Zain discovered even the lowest concentrations had a significant effect in breaking down the cell wall of the fungus, demonstrating its potential as a future treatment for patients.

She said: “Chronic infections, such as those found in long-lasting wounds comprise about 60-80 per cent of infectious diseases in humans and the way fungi invades wounds is associated with the use of broad-spectrum antibiotics.

“However, we know that biofilms – thin layers of microorganisms, which group together – contribute to the severity and delayed healing of chronic wounds.

“Through my research I wanted to show the potential for honey as a healing agent to break through these biofilms and in doing so increase the process of healing. What I found amazing is that honey actually works better than some antifungals.”

Zain (29) from Saudi Arabia is one of only handful of students who have completed The University’s new master’s degree course in Medical Mycology which runs for just one year instead of the customary two, making it a world first.

Because of the way the course is structured Zain was able to spend almost a third of her time in the lab working on experiments to test her theory under the supervision of Dr Riina Rautemaa-Richardson, Senior Lecturer in Infectious Diseases in The University’s Institute of Inflammation and Repair.

Dr Rautemaa-Richardson believes it’s this intensive, hands-on approach, which appeals to her students and equips them for a career in specialised medicine or research.

She said: “This dynamic course provides a solid foundation to the scientific, practical and clinical aspects of fungal diseases, which allows clinically relevant research like this. In the world of increasing antimicrobial resistance new approaches to the management of infections, sparing the real antibiotics, are highly relevant and important.”

Professor Malcolm Richardson, Professor of Medical Mycology at The University of Manchester added: “Honey has been used since ancient times for the treatment of several diseases. Only a limited number of investigations have looked at its effect on pathogenic fungi.

“This opens an exciting door for further work on the application of honey for many fungal infections and allows researchers to adopt different options for treating a range of superficial infections.”

How Do You Solve the Sugar Epidemic? Solve Flavor Defects

For many consumers, the ability to actually taste has been diminished by the addition of flavor blockers. Food formulators have been tasked with masking those pesky sour, astringent or bitter tastes to develop palatable products. Sugar does the heavy lifting for many formulations. It’s plentiful, cheap and keeps us fat and happy.

The food industry is undergoing a major disruption as consumers are waking up to the perils of sugar.Josh Hahn.has written an excellent article discussing some of the healthier sugar substitutes available to formulators. Stevia, monk fruit and mushrooms are in the pantry. For more surprises, read more.

With the average American consuming three times the daily recommend amount of sugar and obesity reaching epidemic proportions, the food industry is frantically trying to develop healthier products. However, taking sugar out of foods is not as simple as it sounds as it provides a critical role in product development due to flavor defects.

Agave Not So Sweet?

Ix-nay On The Agave!

Oh , gosh! Don’t you just love agave sweetener? So delicious and low on the glycemic index. Doesn’t it just seem like the perfect natural sweetener?

Fructose once seemed like one of nutrition’s good guys . . . But fructose, at least in large quantities, may have some drawbacks. Fructose is metabolized almost exclusively in the liver. It’s more likely to result in the creation of fats, which increase the risk for heart disease.

Moreover, recent work has shown that fructose may have an influence on the appetite hormones. High levels of fructose may blunt sensations of fullness and could lead to overeating. (It., Ed.)

The agave syrup producers never mention the health dangers of their product, but refute Dr. Mercola while standing up for the sustainability of agave farming and the trickle down to the Mexican farmers involved.

Scientists shocked as fruit flies die in less than a week from eating GMO-derived erythritol.

You have to love how the food marketing industry feeds us everything they want us to know. Stevia, the ‘natural’ ingredient used in Truvia sounded like a great option. Now it turns out genetically modified food processing gives the industry some cover by saying “erythritol is not derived from corn or dextrose feedstock; it is derived from the yeast organism.”

The fact that they’re feeding the yeast genetically modified food doesn’t insulate them from truth in marketing or us from being ignorant about what we’re eating. It’s no wonder the “Label GMO” movement is growing exponentially in the U.S.

Read more from the Natural News 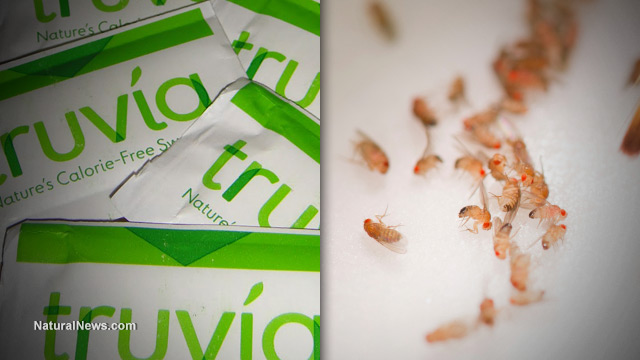 The Brain Cannot Be Fooled By Artificial Sweeteners

The results of the new study imply that it is hard to fool the brain by providing it with ‘energyless’ sweet flavors. Our pleasure in consuming sweet solutions is driven to a great extent by the amount of energy it provides: greater reward in the brain is attributed to sugars compared to artificial sweeteners.

Professor Ivan de Araujo, who led the study at Yale University School of Medicine USA, says: “The consumption of high-calorie beverages is a major contributor to weight gain and obesity, even after the introduction of artificial sweeteners to the market. We believe that the discovery is important because it shows how physiological states may impact on our choices between sugars and sweeteners.

“Specifically, it implies that humans frequently ingesting low-calorie sweet products in a state of hunger or exhaustion may be more likely to ‘relapse’ and choose high calorie alternatives in the future.

“The results suggest that a ‘happy medium’ could be a solution; combining sweeteners with minimal amounts of sugar so that energy metabolism doesn’t drop, while caloric intake is kept to a minimum.”

The study identified a specific physiological brain signal that is critical for determining choice between sugars and sweeteners. This signal regulates dopamine levels – a chemical necessary for reward signalling in the brain – and only arises when sugar is broken down into a form where it is usable as fuel for cells of the body to function.

Research was performed in mice, using a combination of behaviural testing involving sweeteners and sugars, whilst measuring chemical responses in brain circuits for reward. The researchers believe the findings are likely to reflect in humans.

Professor de Araujo says: “According to the data, when we apply substances that interfere with a critical step of the ‘sugar-to-energy pathway’, the interest of the animals in consuming artificial sweetener decreases significantly, along with important reductions in brain dopamine levels.

“This is verified by the fact that when hungry mice – who thus have low sugar levels – are given a choice between artificial sweeteners and sugars, they are more likely to completely switch their preferences towards sugars even if the artificial sweetener is much sweeter than the sugar solution.”

Now that the team know that dopamine cells are critical in sugar/sweetener choice, they hope to identify the associated receptors and pathways in the brain.