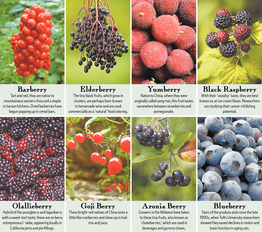 Move over, acai. Food and flavor companies are hunting for the next big berry.  Berries are the bomb and few of us need convincing to try them out.

Berries are nutritional royalty these days for their reputation as both a “low glycemic food” and a rich source of antioxidants, the substances that may protect cells against the damaging effects of “free radicals.” And like a dash of red lipstick, berries provide a splash of rich color and an upscale aura to supermarket products ranging from breakfast cereal and granola bars to juices and yogurt. Their fan base spans from the health- and diet-conscious community to picky toddlers.

Most berries want to emulate blueberries, which have transformed from tasty things found in muffins and pancakes to stars of the produce aisle, says Lu Ann Williams, head of research for Innova Market Insights, based in the Netherlands. Now more varieties want to make the leap from seasonal treat to staple. Since 2008, Innova says, U.S. marketers have introduced 358 products with goji berries as an ingredient, about 200 with bilberry and more than 500 with elderberry, the latter driven largely by its use as a natural food coloring. “They’re here to stay,” Ms. Williams says.

The result is that berries remain a premium product, with an average retail price of $2.82 for units comparable with $1.68 a pound for stone fruits like plums, peaches and nectarines, according to Nielsen Holdings N.V NLSN -0.30% .’s Perishables Group.

In the past two years, weekly same-store supermarket sales of berries have risen 18%, according to Nielsen, despite an average 4% rise in retail prices for the berries in the same period. Sales of raspberries rose 31%, and blackberries and blueberries 27% and 25%, respectively. Strawberries’ respectable 11% increase is actually a drag on growth.

The Washington Red Raspberry Commission, which represents growers, has taken note of blueberries’ success and funded recent studies on raspberry consumption’s effects on diabetes, chronic inflammation and other ailments. Driscoll Strawberry Associates Inc., a Watsonville, Calif., berry grower, last year began promoting heart health on supermarket signs and recipe cards with the slogan, “Raspberries…Your Heart Will Love You Back.”  (The downside is that strawberries are one of the most heavily pesticide sprayed fruits and are consistently on the buy organic list.)

Of course, as with a lot of dietary health claims, consumers’ hopes often outweigh the scientific evidence.

Once best known for flavoring ice cream, black raspberries are now playing a role in cancer research. Don Sturm has more than doubled the size of Sturm’s Berry Farm, in Corbett, Ore., in the past five years to 290 acres. He grows everything from blackberries to Marionberries, but much of his new acreage is devoted to black raspberries.

“I never even liked black raspberries that much before,” Mr. Sturm says. “But now I make sure to put them on my cereal every day.”

Some trace the start of the berry boom to the late 1990s, when Tufts University researchers showed that a diet of blueberry supplements helped alleviate age-related declines in motor and brain function in rats. In addition, blueberries are rich in anthocyanins, pigments that provide the dark-blue color and offer antioxidant benefits. The Tufts findings fueled hundreds of studies on the effects of other berries on cancer prevention and heart health, says Mary Ann Lila, director of North Carolina State University’s Plants for Human Health Institute.

Next came acai, the small, black berry from Brazil, which made a splash in 2008, when TV doctor Mehmet Oz called the acai an “antiaging” food.

The tiny, purple aronia berry, or chokeberry, a native of the eastern U.S., had all but disappeared from cultivation until growers saw its potential as a health food. The Midwest Aronia Association formed in 2008. Westin Foods, of Omaha, Neb., whose top-selling food product is bacon, now sells aronia berries under the Superberries brand in packets of gummy chews for kids and in concentrate form for adding to smoothies.

Unfamiliar berry flavors can be earthy or tart, as in the case of goji berries and bilberries, which are the blueberry’s smaller, tarter cousins. To introduce these flavors to consumers, many companies blend them with sweeter, more-familiar flavors, like raspberry or pomegranate, says Ed Nappen, a senior marketing manager for International Flavors & Fragrances Inc., IFF -1.30% the big supplier of ingredients based in New York.

On the radar for next year is the Olallieberry, a hybrid cross of loganberry and youngberry that is known locally in California, says Andrea Ramirez, customer marketing manager for Torani, a San Francisco maker of berry and other flavored syrups. “Seasonally you see it around here in pies and other desserts,” she says. “It tastes sweet and tart and is especially good in lemonades, iced teas and cocktails.”

“I had never heard of them until our cook in the kitchen said, ‘Hey, try these,’ ” says Tara DelloIacono Thies, Clif Bar’s registered dietitian.

“Shocked” is how she describes her reaction to the flavor. They give a “nice balance” to the sweet dates, she adds, and their smaller-than-a-raisin size adds unique texture.

A version of this article appeared July 10, 2013, on page D1 in the U.S. edition of The Wall Street Journal, with the headline: America’s Next Top Super Berry?.

The berry connection was uncovered in a new study led by Dr. Eric Rimm, associate professor at the Harvard School of Public Health and Harvard Medical School. He and his team gathered data from 93,600 women, who, at ages 25 to 42, signed up for the Nurses’ Health Study. Over the course of 18 years, they reported how often they ate various kinds of food.

Berries emerged as a protective factor. Women who ate the most blueberries and strawberries were 34% less likely to have suffered a heart attack during the study period than women who ate the least of these fruits.

How much berries are needed? “The people with heart benefits had three or more servings of half a cup of blueberries or strawberries each week,” Rimm says.

The study focused on young and middle-aged women. But the findings likely apply to everyone, including men.

“The sooner people start the type of diet that includes a higher intake of blueberries and strawberries, the better,” Dr. Rimm says.

The Harvard Heart Letter is available from Harvard Health Publications, the publishing division of Harvard Medical School, for $20 per year. Subscribe at www.health.harvard.edu/heart or by calling 877-649-9457 (toll-free).

Eating three or more servings of blueberries and strawberries per week may help women reduce their risk of a heart attack by one-third – according to research from the University of East Anglia in collaboration with the Harvard School of Public Health.

These berries contain high levels of powerful bioactive compounds called anthocyanins, which are a sub-group of dietary flavonoids.

Research published today in Circulation: Journal of the American Heart Association shows that these anthocyanins may help dilate arteries, counter the build-up of plaque and provide other cardiovascular benefits.Scientists from UEA’s Norwich Medical School and Harvard School of Public Health (US) studied 93,600 women aged between 25 and 42 who were registered with the Nurses’ Health Study II. The women completed questionnaires about their diet every four years for 18 years.During the study, 405 heart attacks occurred. Women who ate the most blueberries and strawberries had a 32 per cent reduction in their risk of having a heart attack compared to women who ate the berries once a month or less – even in women who otherwise ate a diet rich in other fruits and vegetables.

The study was lead by Prof Aedín Cassidy – head of the Department of Nutrition at UEA. She said: “We have shown that even at an early age, eating more of these fruits may reduce risk of a heart attack later in life. This is the first study to look at the impact of diet in younger and middle-aged women.

“Blueberries and strawberries contain high levels of compounds that have cardiovascular benefits, and our study shows that women who ate at least three servings per week had fewer heart attacks.”

“Blueberries and strawberries were part of this analysis because they are the most-eaten berries in the United States. It is possible that other fruit and vegetables could produce the same results.”

Senior author and associate professor of nutrition and epidemiology at Harvard, Eric Rimm, added: “Blueberries and strawberries can easily be incorporated into what women eat every week. This simple dietary change could have a significant impact on prevention efforts.”

Until more information about specific dietary constituents like flavonoids is available and fully understood, the American Heart Association recommends eating a balanced diet containing a wide variety of fruits, vegetables and whole-grain products. Eating a variety of foods is the best way to get the right amounts of nutrients.

An experiment has shown that strawberry extract added to skin cell cultures acts as a protector against ultraviolet radiation as well as increasing its viability and reducing damage to DNA. Developed by a team of Italian and Spanish researchers, the study opens the door to the creation of photoprotective cream made from strawberries.

“We have verified the protecting effect of strawberry extract against damage to skins cells caused by UVA rays,” as explained to SINC by Maurizio Battino, researcher at the Università Politecnica delle Marche in Italy and lead author of the jointly Spanish and Italian study. The results are published in the ‘Journal of Agricultural Food Chemistry’. 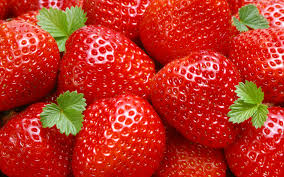 The team prepared human skin cell cultures (fibroblasts) and added strawberry extract in different concentrations (0.05, 0.25 and 0.5 mg/ml), the only exception being the control extract. Using ultraviolet light, the samples were then exposed to a dose “equivalent to 90 minutes of midday summer sun in the French Riviera.”

Data confirm that the strawberry extract, especially at a concentration of 0.5 mg/ml, displays photoprotective properties in those fibroblasts exposed to UVA radiation, it increases cell survival and viability and decreases damage in the DNA when compared with control cells.

“These aspects are of great importance as they provide protection for cell lines subject to conditions that can provoke cancer and other skin-related inflammatory and degenerative illnesses,” outlines Battino.

The researcher recognises that this is the “first step in determining the beneficial effects of strawberries in our diet or as a possible compound source for ‘food integrators’ or cosmetics for instance.”

The redness of anthocyanins

But what molecules give strawberries their photoprotective properties? Scientists suspect that it could be the anthocyanins, which are pigments that give leaves, flowers and fruits their red colour. Analyses have confirmed that extracts are rich in such substances.

“These compounds have important anti-inflammatory, antioxidant and anti-tumour properties and are capable of modulating enzymatic processes,” explains another of the authors, Sara Tulipani from the University of Barcelona. She adds that “we have not yet found a direct relationship between their presence and photoprotective properties.”

“At the moment the results act as the basis for future studies evaluating the ‘bioavailability’ and ‘bioactivity’ of anthocyanins in the dermis and epidermis layers of the human skin, whether by adding them to formulations for external use or by ingesting the fruit itself,” states Tulipani.

Also made up of researchers from the Universities of Salamanca and Granada, in its previous works the team had already demonstrated that strawberries (Fragaria x ananassa) strengthen the red bloods cells and protect the stomach from the effects of alcohol.