Burn Calories Fast With These 6 Foods

Want to burn your calories fast? Just add these 6 foods to diet to speed up metabolism

Take a look at some of these nutrient-rich foods to increase your metabolism.

There are a number of drinks and other products in the market that claim to boost your metabolism. But the effectiveness of these products is, however, questionable. What goes without saying is that natural foods are the best. If you didn’t know, these vitamins and nutrient rich foods can actually boost your metabolism and give your body the sustenance it needs to survive and thrive.

Beans are loaded with dietary fibre which lowers the insulin levels and improves insulin sensitivity over time. This in turn, helps your body to store less fat. It serves as an excellent food for boosting metabolism.

Oily fishes such as salmon and tuna are rich in omega-3 fatty acids. These fatty acids reduce resistance to leptin – a hormone that helps in determining how fast fat is burned.

It also balances blood sugar and helps in reducing inflammation and both of them helps in regulating metabolism. So, oily fish is a great choice for boosting your metabolism.

Cruciferous vegetables such as cabbage, broccoli, cauliflower, and Brussels sprouts contain essential nutrients like calcium and vitamin C that will speed up your metabolism. Apart from it, they also have high water and fibre content. This combination increases the ability of the body to burn fat.

You may have heard that spicy foods help in boosting your metabolism and it is true. The compound, capsaicin that makes peppers hot helps your body burn more energy. It even curbs your hunger for at least three hours after you eat. It serves as an excellent food for increasing metabolism.

Citrus fruits are great for digestion. They are low in sugar and contain an antioxidant that helps in lower your blood sugar response after meals. The vitamin C in citrus fruits helps in faster metabolism.

More Than A Hill Of Beans

Now is the time to get to know the sweet, creamy flavors of beans that come straight from the pod.

FEW VEGETABLES HAVE BEEN ABLE to maintain their seasonal integrity like fresh shell beans. These beans—the fat ones within streaky, colorful pods—generally show up in late summer and are gone before you can return to the market for another pound. Most of us know shell beans (also called “shelling” or “shellies”) after they’ve been dried and removed from the pod (think: black turtles, flageolets and pintos).

Fresh means exactly that; these beans are taken from the plant, in their pods, before they begin to dry. Removal from the pod is labor-intensive, which is likely the reason fresh beans have become more treat than dinner staple (though their short shelf life doesn’t help either).

With the ascendant farm-to-table sensibility and mechanical hoppers replacing hands and fingers, shell beans are coming back. Look for scarlet runners, purple hulls and rattlesnakes, among others (favas, however, aren’t available until spring). 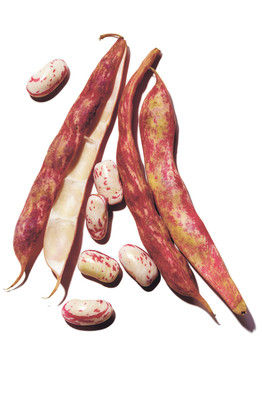 A tie-dye of reds and creams, cranberry beans are among the season’s most gorgeous—not to mention available—pods. After cooking, the beans turn a beige-gray and taste buttery and earthy. For chef Wesley Genovart of SoLo Farm and Table in South Londonderry, Vt., the vegetal taste of fresh cranberry beans is only one part of the appeal. “It’s texture,” he said. “They’re soft and creamy.” He suggests blanching them until tender, about 10 minutes, then adding to a broth or soup. Roasted sturgeon served in an aromatic broth with fresh cranberry beans is a coming item on Mr. Genovart’s menu. 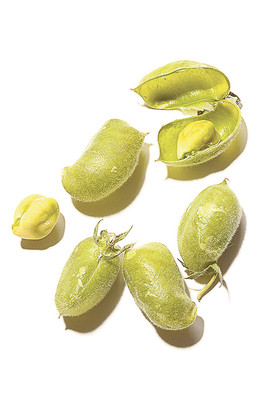 We’ve all encountered garbanzos, aka chickpeas, but not many of us have seen them in their paper-thin pods, which only hold two to three beans. When fresh, the beans range from pale to rich green. “Fresh garbanzos have a grassier and more herbal taste than dried or canned,” said chef Brandon McGlamery of Luma on Park, in Winter Park, Fla. “It’s a brighter, fresher flavor that gets lost once preserved.” Mr. McGlamery hosts shelling parties when shellies are delivered in pods. He suggests frying fresh garbanzos until golden brown and crispy, or braising them in a sofrito—a tomato-rich sauce common in Latin cuisine—and removing them from heat the moment they are done (about eight minutes). 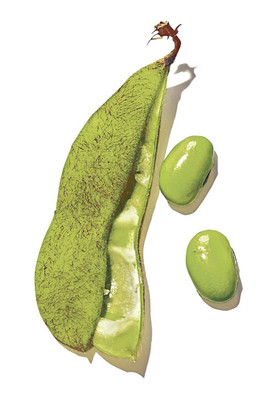 Edamame is the go-to appetizer in Japanese restaurants, but few of us know the beans in their fresh state. Somewhat paler than the bright green we recognize from salad bars and supermarket freezers, “fresh edamame has more of a bean flavor that’s fresh and sweet,” said chef Coby Ming of Harvest, in Louisville, Ky. “You can blanch edamame on their own, with a little salt,” said Ms. Ming, who grew up shelling fresh beans on her grandmother’s back porch. Or you can do what Ms. Ming does at her restaurant: Stuff a tomato with a mixture of blanched edamame, grilled corn, grilled onions, oven-dried tomatoes and fresh basil.

A version of this article appeared September 8, 2012, on page D4 in the U.S. edition of The Wall Street Journal, with the headline: The Shell Game.