A New Standard For Whole Grain

The most comprehensive definition of whole grain termed to date has been published this week in the journal Food and Nutrition Research. The effort to create the definition, which is intended to assist in the production and labeling of foods rich in whole grains, was born of the HEALTHGRAIN EU project, the largest project ever focusing on cereals and health; and was led by a multi-disciplinary team from some of Europe’s leading universities and food research institutes.

Historically, there’s been no complete, legally endorsed definition of whole grain flour and products,” explains Jan-Willem van der Kamp, corresponding author of the paper and Senior Officer of International Projects at TNO Food and Nutrition. “Most supermarkets today are stocked with foods that originate from many different countries. When you read ‘25% whole grain flour’ on one product label; the same claim on a different label could mean something quite different nutritionally. If use of this definition is adopted broadly, this inconsistency eventually would cease.”

The HEALTHGRAIN definition is the next step in reaching a precise, common understanding of what constitutes whole grain in food products – from breads to pasta to breakfast cereals – regardless of where they originate, adds van der Kamp.

Almost universally, the term whole grain indicates inclusion of all three components of the cereal grain kernel – endosperm (this is the largest part of the grain and provides mostly starch), germ (comprises only a small part of the grain; this is where sprouting begins) and bran (the grain’s protective outer layer; it is rich in dietary fibre). Variances, however, arise around the particular grains considered “whole”, precise combination of the three components once processed, and processing practices which can affect the resulting flour’s nutritional value. The HEALTHGRAIN definition addresses all three of these issues detailing a permitted list of grains and “pseudo grains” (such as quinoa and amaranth) and processing guidelines that take into account current milling practices.

The need for developing a more comprehensive, detailed whole grain definition was identified during the course of the HEALTHGRAIN EU project, an initiative intended to increase the use of whole grains and their health protecting constituents in food products for improved nutrition and health benefits. The expansive project has involved everything from research to better understand specific health benefits of whole grains to exploration of new ways to get products high in their healthy compounds onto the market.

The HEALTHGRAIN definition was developed by a committee led by van der Kamp, representatives of the Swedish Nutrition Foundation; DPR Nutrition Ltd., UK; and VTT and University of Eastern Finland; in cooperation with a multidisciplinary group of nutrition scientists, cereal scientists and technologists, plant breeders, flour milling specialists and experts in regulatory affairs from throughout Europe.

The article with the complete HEALTHGRAIN definition, including the permitted grains, can be accessed in the current volume of Food and Nutrition Research (http://www.foodandnutritionresearch.net/index.php/fnr/article/view/22100).

A recent story By ANNIE GASPARRO  in the Wall Street Journal pointed out some of the ways mainstream groceries are rushing to copy Whole Foods to stem the shrinking margins against rising food costs.  There’s some skepticism about just how much “healthy” or “organic” food is really in the market. If you don’t believe me, just ask any grocer to point out the food products in their store that have no genetically modified ingredients. Go ahead, . . . . .  I’ll meet you in the produce aisle.

Traditional supermarkets are investing more in the healthy food fad, trying to win back customers from the increasingly popular Whole Foods Markets Inc. and farmers markets. (Healthy food fad?? WTF??  Poor health and absenteeism is costing U.S. companies $564 billion a year. I think we’re past healthy food being a ‘fad’. Maybe a lifeline would be more apt).

Kroger Co., one of the nation’s largest grocery store networks with 2,200 locations, is the latest in rolling out a new natural and organic foods brand it hopes will boost profitability and help it compete more strongly in the segment. 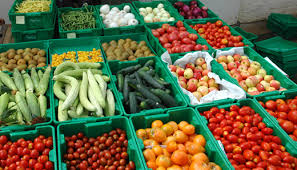 In recent years, mainstream supermarkets have been losing their hold on the grocery business to myriad competitors infringing on the territory. Meanwhile, food cost inflation and budget-minded consumers are making it tougher for them to turn a profit.

Kroger has outpaced competitors, such as Safeway Inc. and Supervalu Inc., by marking down its prices to become value-oriented, even before the recession started, and expanding its store-branded line of products to lure budget shoppers.

Kroger’s first natural foods line, Naturally Preferred, was brought to stores in 2000. The company then launched its Private Selection Organic line in 2006. But the two didn’t generate the loyal following Kroger hoped.

“Our customers told us that having multiple brands was confusing to them,” Mary Ellen Adcock, Kroger’s vice president of natural foods division, said in an interview.

“This way it’s easy for them to find natural and organic products that they know they can trust, and to have more choices of both…. Choice drives incremental sales,” she added.

Kroger’s new brand, Simple Truth, is intended to be less complicated—by rebranding the two existing lines under one umbrella—and to be more affordable than fancy organic brands. Simple Truth reminds me of Clear Skies, No Child Left Behind and all the other attempts to co opt language to obscure meaning.

Even though private-label prices are lower, that business is more profitable for grocery stores than sales of name-brand products. Safeway, which operates regional chains such as Vons and Randalls, has said profit margins on its store-brand products are about four percentage points better than name-brand sales. And on average, store brands generate a 35% gross margin compared with 25.9% for national brands, according to the Food Marketing Institute.

Kroger has increased its store-brand business over the past few years to now constitute about 34% of the grocery items it sells, compared with just 19% at rival grocer Supervalu.

Demand for organic food is also on the rise, according to the Organic Trade Association, which claims 78% of U.S. families say they are choosing organic foods as part of their shopping. California is poised to pass the first of it’s kind GMO labeling law in the U.S. (Most foreign countries already have labeling requirements for GMO’s).

The trend has gotten credit for the continuing success of stores like Whole Foods and The Fresh Market Inc., along with the big boost in farmers markets over the past few years. Yet it appears Whole Foods has proven to be less concerned with their principles of whole food, whole people and whole planet by carrying produce from China and labeling it as organic.

“People are still value conscious, but they are even more organic conscious,” said Whole Foods Chief Operating Officer A.C. Gallo. “Supermarkets pulled back their focus on organics during the recession, and are now starting to bring that back. But for us, it isn’t something we get in to or out of based on a fad or which way we think the wind’s blowing,” he added.

As mainstream grocers try to compete with the leading organic players for the best value proposition, they will also be up against Whole Foods’ private line, dubbed 365 Everyday Value, which already has a loyal following and wide range of products. (Apparently, not all certified organic as labeled).

“The mainstream supermarkets are launching private-label organic offerings to show customers that they have natural and organic options, but that is our entire store. So our purpose with 365 is to show our customers that we also can offer a good value.” He said the store’s margins on the products aren’t always better than sales of the national brands, but that Whole Foods is more focused on building sales volume and increasing customer frequency with the line.

Kroger is rolling out nearly 250 new products to the Simple Truth line now, and plans to come out with others, such as cereals and frozen pizzas, over the next few months. The company expects Simple Truth to become a “billion-dollar brand” in terms of sales, like the rest of its private brands. (I wonder what the simple truth about these foods really is. We do know one truth about genetically modified foods — they cause tumors and organ failure when administered to mice in safe doses. That’s a simple truth.)

Other grocery stores, such as Supervalu, have also recently moved to a single private-label line across all their stores, counting on the larger-scale operations to help decrease costs and increase marketing capabilities.

Supervalu, whose brands include Albertsons, Jewel-Osco, Shaw’s and more, is also expanding its private-label business this year, including a line of natural and organic foods called Wild Harvest. Safeway introduced its all-natural brand, Open Nature, in late 2010, to complement its existing organic line and health-oriented brand

One way is to patronize merchants willing to be transparent about the food products they carry or their educational outreach about those products.  For example, Earth Fare carries no products containing high fructose corn syrup ( HFCS).  Mother’s Market & Kitchen offers educational information to both customers and staff.  Our food is in peril. How can we be sure that what we buy in a health food store is healthy?

Lewd Food in your supermarket aisles? Rebranding is not a guananteed path to success especially when consumers are playing Russian Roulette with each food purchase.  It’s still a buyer beware marketplace and the savvy food shoppers  know value and what questions to ask their grocers.