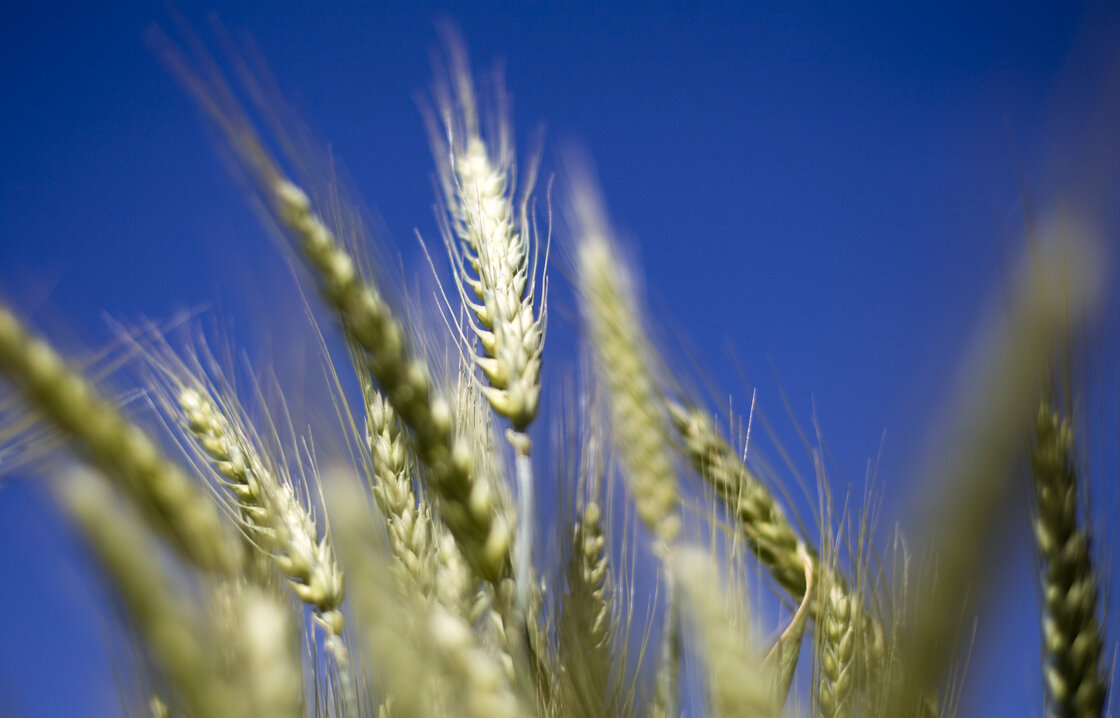 Wheat grows in a test field at Oregon State University in Corvallis. Some scientists believe that there’s a chance that genetically modified wheat found in one farmer’s field in May is still in the seed supply.

The strange case of genetically engineered wheat on a farm in Oregon remains as mysterious as ever. If anything, it’s grown more baffling.

As we almost two months ago, the presence of this wheat was revealed earlier this spring when a farmer in eastern Oregon sprayed a field with the weedkiller glyphosate, or Roundup. Most vegetation died, as the farmer intended, but clumps of green wheat stalks kept growing. They apparently had sprouted from grain that was leftover in the field from last year’s crop.

It was such a strange sight that the farmer wondered if this wheat might be genetically modified to be resistant to glyphosate, just like the popular Roundup Ready versions of corn and soybeans. He called a weed scientist named Carol Mallory-Smith at Oregon State University to ask her opinion.

“I said I didn’t think so,” recalls Mallory-Smith. The biotech company Monsanto had developed such wheat years earlier, and carried out field trials of it, but those trials ended at least eight years ago. Monsanto never asked for government approval to sell such wheat, and growing it without a permit from the U.S. Department of Agriculture actually would violate the law.

“So I was pretty skeptical, but I said, ‘If you send me some samples, I’ll test it,’ ” Mallory-Smith says.

To her surprise the tests came back positive. She passed the samples on to the USDA, which confirmed her results and an investigation.

The USDA is trying to answer two big questions about this wheat. First, where else can it be found? Second, how did it get into this farmer’s field?

Hundreds of millions of dollars could hang on the answer to the first question. If rogue genes are present in America’s wheat harvest, some customers — especially in Japan and Korea — say they won’t take it.

Fortunately for American wheat farmers, the search so far has come up empty. Korea has been testing shipments of U.S. wheat and the USDA has tested thousands of samples collected from farms and seed companies — including the business where that Oregon farmer bought his seed. They’ve found no GMOs, anywhere.

Blake Rowe, CEO of the Oregon Wheat Commission, expects Japan, which has suspended its purchases of U.S. wheat, to resuming buying when it’s sure the wheat is GMO-free. “We’re confident they will come back to the market, but there’s a lot of concern about how quickly that will happen,” he says.

Every test that comes up negative eases the worries of the wheat industry, but it also makes the source of this GMO wheat a bigger mystery. Investigators are finding no trail that leads from the Oregon farm back to Monsanto’s research operation.

Across the wheat-growing areas of the Pacific Northwest, farmers and wheat dealers now are trading speculative theories about how this might have happened.

Monsanto’s chief technology officer Robert Fraley, laid out a particularly attention-grabbing scenario a few weeks ago during in a conference call with reporters. “The fact pattern indicates the strong possibility that someone intentionally introduced wheat seed containing the CP4 event into his field, sometime after that farmer initially planted it,” Fraley said, referring to Monsanto’s Roundup resistance gene

As for a motive, “there are folks who don’t like biotechnology and would use this as an opportunity to create problems,” Fraley continued. He speculated that anti-biotech activists may have stolen wheat from one of Monsanto’s field trials of GMO wheat. They could have stored this grain for a decade, then planted it in a field and waited for a farmer to discover it.

Others find Monsanto’s theory dubious, or “a stretch,” as , a wheat breeder at Oregon State, puts it.

Zemetra thinks an ordinary mistake is more likely: that somebody involved in Monsanto’s GMO wheat trials just happened to misplace a bag of wheat at some point. “Or you have a bag that gets mislabeled and gets put on the shelf and just sits there,” he says.

In this scenario, somewhere along the way someone picks up that bag and treats it like normal, conventional wheat seed. Some goes to that farm. Maybe the amount of GMO wheat is so small that tests now miss it.

Zemetra admits that his scenario isn’t exactly convincing, either. But he’s heard nothing better.

Bernadette Juarez, an official with the USDA’s Animal and Plant Health Inspection Service who is in charge of the investigation, says the agency is now analyzing the genetic makeup of the GMO wheat, to figure out exactly which genetic variety of wheat it is. This will be a clue to its source; it should pinpoint, for instance, which of Monsanto’s many different field trials involved that variety.

Maybe investigators will be able to pick up a trail of rogue wheat leading from one of those trials to the farm in eastern Oregon. If not, the case may remain a mystery.