When Your iPad Puts Your Heart At Risk 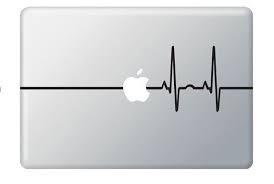 If You Have an Implantable Defibrillator and an Apple iPad, Don’t Hold it Against Your Chest

An iPad2 can trigger magnet mode in defibrillators and therefore suspension of anti-tachycardia therapy. Other devices with imbedded magnets are likely to cause similar interference. To date, this study suggests that interference is possible and care should be taken by individuals handling iPads with CRDs.

Published Sat May 11 2013 8:18 am  http://www.arlingtoncardinal.com/?p=62478
Gianna Chien was somewhat different from all the other researchers reporting on their work May 9, 2013 to more than 8,000 doctors at the Heart Rhythm Society 34th Annual Scientific Sessions meeting in Denver, CO. Ironically, Chien’s study is based on a science-fair project that didn’t even win her first place. Olivia Sterns reports on Bloomberg Television’s “Money Moves.” (Source: Bloomberg)

The Magnet Mode is an intentional feature for maintenance for analysis of the implantable medical device. But an Apple iPad or any computer laptop that is inadvertently placed near the chest of a patient with an implantable defibrillator, could cause the device to fail to work when it’s needed if a harmful heart rhythm happened to occur.

Gianna Chien is 14, but her high school science fair project, which found that Apple’s iPad 2 can interfere with life-saving heart devices was presented to more than 8,000 doctors at the Heart Rhythm Society meeting in Denver, Colorado.

If a person falls asleep with the iPad 2 on the chest, the magnets in the cover can “accidentally turn off” the heart device, said Chien, a high school freshman in Stockton, California, whose father is a doctor. “I definitely think people should be aware. That’s why I’m presenting the study.”

The Apple iPad 2, for example, uses 30 magnets to hold the iPad’s cover in place, Chien said. While the iPad 2 magnets aren’t powerful enough to cause problems when a person is holding the tablet out in front of the chest, laying the iPad on the chest or holding it against the chest while carrying it can be risky.

The problem has also been documented with laptops in a study released in June 2012. A study showed that an implantable cardioverter-defibrillator (ICD) experienced electromagnetic interference from a laptop computer’s hard disk. The patient with the ICD was using his laptop computer at home while lying on his bed. The laptop was positioned on his chest, when he heard a beeping sound from the ICD, indicating magnet mode conversion. The situation was replicated in a controlled environment, and the conversion was found to be due to the static magnetic field produced by the laptop’s hard disk. The ICD’s conversion to magnet mode can be dangerous because it ends all tachyarrhythmia detections and therapies.