Like a lot of aging Americans, consumer products and drug companies are hoping vitamins will give them an energy boost. 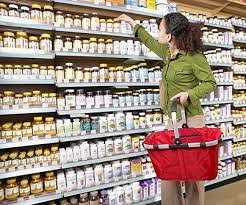 Supplements appeal because they can tap into the desire for health remedies and claim high prices, without the hassle of tough U.S. regulatory oversight.  (Not to mention the countless scientific studies validating efficacy).

Sales of vitamins, minerals and supplements totaled nearly $23 billion in the U.S. last year, according to Euromonitor International, and are growing at a 5% to 7% annual clip.

Some major retailers are allocating more shelf space to health supplements, giving manufacturers the room to move more brands and products. Meanwhile, sales of many consumer products and over-the-counter drugs are growing only at or below the rate of economic growth.

The shift in American demographics and tastes is lifting a business that consumer companies have tried before. Half a decade ago, poor sales led P&G to pull a line of women’s vitamins launched under its Olay beauty brand. But the company gave the business another try last spring by acquiring New Chapter Inc., a Vermont-based maker of supplements that are sold through health and specialty stores.

“We may have been ahead of our time” with the Olay vitamins, said Tom Millikin, a spokesman for P&G’s health-care division, where New Chapter is housed. “Today, people are more health-conscious and more focused on preventative health care.”  (It’s also taken years of consumer education to solidify the value proposition of food and nutrition as the basis for health).

William Hood, an investment banker at Houlihan Lokey in New York, said potential buyers are looking for vitamin and supplement brands that are well established or still independently owned.

Companies seen as ripe for deals, according to people familiar with the matter, include NBTY Inc., known for brands like Nature’s Bounty, Balance Bar and the Disney DIS -0.19% line of children’s vitamins, and Jamieson Laboratories, Canada’s largest manufacturer of vitamins and supplements, with products sold in more than 50 countries. Atrium Innovations Inc. ATB.T -1.41% and Thorne Research Inc., which make high-end supplements sold by medical professionals, are also possible acquisition candidates, the people added.

Eric Margolis, chairman of Jamieson, said the 91-year-old company attracts many suitors and has had discussions with a large British firm and others as it seeks to expand its sales in the U.S.

“It’s no secret that there has been growing interest in the nutritional supplement industry in recent years,” he said.

A spokesman for Carlyle Group, CG +0.30% which took NBTY private in 2010 in a $3.6 billion deal and has since expanded the business, declined to comment on whether it might be sold.

A spokeswoman for Atrium, which is publicly listed in Toronto, declined to comment on whether the company is willing to be acquired.

The sector is shaping up to be a battleground between pharmaceutical players and consumer-products companies, many of which are trying to counter slow growth in their mainstay businesses. Last year, British consumer company Reckitt Benckiser RB.LN -1.19% PLC topped Bayer AG BAYN.XE +1.59% in a bidding war by paying $1.4 billion for Schiff Nutrition, a U.S.-based supplements company best known for its Airborne fizzy vitamins.

Companies in both industries used to be skeptical about vitamins and supplements. The business historically has been highly fragmented, with scores of different brands and products, few of which are well known. (Yet the industry continues to grow despite tiny marketing budgets compared to big pharma).

Then Pfizer acquired Centrum and a new portfolio of consumer goods as part of its $68 billion takeover of Wyeth in 2009. Pfizer’s consumer-unit sales, including the vitamins business, rose 6% last year to $3.2 billion. The company partly attributed a 16% increase in consumer-health-products sales in the fourth quarter of 2012 to the “strong growth” of Centrum in the U.S.

Pfizer came under pressure from some on Wall Street to sell its consumer unit last year, but is expanding it instead. In 2011, the pharmaceuticals company bought Ferrosan Consumer Health, a Danish company that sells dietary supplements mainly in the emerging markets of Russia and Central and Eastern Europe. Last year, Pfizer acquired Alacer Corp., the maker of Emergen-C powdered-drink vitamin supplements.

Emergen-C sales have since grown 20%, according to Pfizer. “Consumers are taking increasing personal responsibility for their own health and wellness,” according to Paul Sturman, president of Pfizer’s consumer health-care unit. “Vitamins and dietary supplements play an important and direct role in this.”

There are limits on what the sector can contribute to companies’ growth. Many vitamin and supplement makers are small, so the acquisitions are unlikely to move the needle much for large consumer and drug companies. Popularizing better-known brands could also require significant investment in advertising and promotions, which could pressure profit margins. And Keith Pelt, managing director for consumer coverage at Deutsche Bank, DBK.XE -0.23% said regular vitamins have become commodities.

Unlike prescription drugs, vitamins, minerals, botanicals and other dietary supplements don’t need to be approved by the Food and Drug Administration as safe and effective in order to be sold; that means the products don’t have to undergo clinical testing in humans that can take years and cost hundreds of millions of dollars. (Why vitamins, minerals and dietary supplements should be put into clinical trials is somewhat baffling.  We’re talking about essential nutrients many derived from food. But then the FDA is ok with corn being regulated as a pesticide). However, since 2007, dietary supplement manufacturers are required to follow certain guidelines to ensure they’re pure, have a consistent strength and are manufactured appropriately. See Good Manufacturing Practices.

J&J has tweaked the business in search of more growth. It sold Viactiv brand calcium chews for an undisclosed amount last year, and launched a natural, no-calorie sweetener called Nectresse in the U.S. last summer.

Adding vitamins and supplements can give companies more leverage when negotiating with retail pharmacies that have consolidated, as well as opportunities to make more efficient use of distribution and supply chains.

Laurent Faracci, chief strategy and marketing officer of Reckitt Benckiser USA, said the company can get its newly acquired brands like Airborne and MegaRed supplements into more drugstores and mass-retail channels where it already sells products like Lysol disinfectants and Mucinex decongestants. The company also plans to work with key retailers to better present the vitamins and supplement brands in stores.

“This is clearly a growth area we have identified,” he said, “and we have the marketing power.”

Write to Serena Ng at serena.ng@wsj.com and Jonathan D. Rockoff at jonathan.rockoff@wsj.com

A version of this article appeared April 1, 2013, on page B1 in the U.S. edition of The Wall Street Journal, with the headline: With Top Lines Drooping, Firms Reach for Vitamins.

Reality Of Heavy Metals In Food