What You Should Know
Before You Start 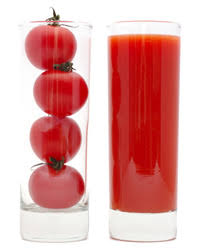 “People from all walks of life are looking for proven ways to lose weight, energize, sleep better, strengthen their immune systems, and have brighter skin and a younger appearance. They’re also juicing to help their bodies heal from a variety of ailments,” says Calbom, author of a new book full of juicing tips, tricks and recipes, “The Juice Lady’s Big Book of Juices and Green Smoothies,” (www.juiceladycherie.com).

“No matter your diet, juicing offers a shot of goodness – nutrition, minerals, phytonutrients and more – that you might not otherwise get,” Calbom says.

Whether you’re just getting started or you’ve been juicing awhile and want to optimize the experience, Calbom shares some important pointers that will help.

• Fruits & veggies happiness studies: Plenty of new research shows that adding more produce to your daily diet can benefit your mental health and sense of well-being. In one analysis of the eating habits and moods of 80,000 British adults, researchers at Dartmouth and the University of Warwick found that those who consumed the most fruit and vegetables every day rated themselves as significantly happier and more satisfied with their lives than those who ate lesser amounts. Research shows that the well-being score for people who ate seven to eight servings of vegetables and fruits per day was consistently three points higher than for those who ate little or none.

• More studies … Researchers at the Harvard School of Public Health concluded from a study of 982 Americans that those who exhibited the most optimistic outlooks on life also had the highest blood levels of carotene, a key antioxidant that’s delivered by a colorful array of produce: dark green spinach and kale, carrots, and sweet potatoes, and vibrant yellow or orange fruits like peaches, papayas and cantaloupe, among others. And “juicers” should consider starting at a young age. A study of 281 adults with a mean age of 20, conducted at the University of Otago, New Zealand, showed that those who reported the highest daily intake of fruits and veggies also declared they were happier, calmer and more energetic than those who ate less.

• “Do I need to juice; can’t I just eat produce?”: This is a common response, but the reality is that most people in 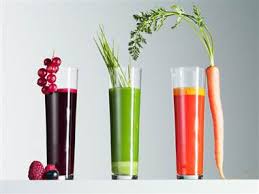 today’s society – especially those who are booked from morning to evening with a busy lifestyle – rarely get an optimal amount of produce throughout the day. A half-cup of veggies is a serving and ¾ of a cup of juice equals one serving; chewing seven to eight servings of produce every day requires much more effort and time than drinking fresh juice for some of the servings. That makes people much more likely to benefit from juice, she says.(Don’t forget to consider whether you have the time to prep, juice and clean up for yourself or if you’re going to buy a juice. Convenience has it’s own costs beyond cash. There’s freshness and variety).

• Flavor diversification: Some people soon fall into creative ruts because they stick to the same basic ingredients, and that can be a disincentive for sticking with juicing. Diversify! Try gourmet and exotic juice blends, or even plant-based ingredients you simply haven’t yet considered, some of which may include: butternut squash, one-inch ginger chunks, beets with leaves and stems, Brussels sprouts, and fennel bulbs with fronds. “Juicing is not about just using common fruit ingredients – spice it up and experiment with healthy vegetables; it works!” Calbom says.

• An exotic example: A fennel-watercress-cucumber blend juice is an excellent way to mix up your typical cocktail. It includes: 1 handful of watercress; 1 dark green lettuce leaf; 1 cucumber, peeled if not organic; ½ fennel bulb and fronds; 1 lemon, peeled if not organic. Cut produce to fit your juicer’s feed tube. Wrap watercress in lettuce leaf and push through the juicer slowly. Juice all remaining ingredients. Drink immediately; this portion serves one.

Cherie Calbom, MS is the author of 21 books, including the best-seller “Juicing for Life,” with 2 million copies sold in the United States and published in 23 countries. Known as “The Juice Lady” for her work with juicing and health, her juice therapy and cleansing programs have been popular for more than a decade. She holds a Master of Science degree in nutrition from Bastyr University. She has practiced as a clinical nutritionist at St. Luke Medical Center, Bellevue, Wash., and as a celebrity nutritionist for George Foreman and Richard Simmons.

Massachusetts Ahead Of The Curve In School Nutrition