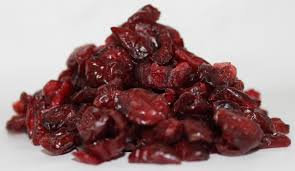 Urinary tract infections (UTIs) are one of the most common bacterial infections, and over 50% of women will have a UTI during their lifetimes. Antibiotics are used for prophylaxis of recurrent UTIs but can lead to emergence of drug-resistant bacteria. Therefore, it is reasonable to investigate nutritional strategies for prevention of UTIs.

Cranberry juices and supplements have been used for UTI prophylaxis, but with variable efficacy. Because dried cranberries may contain a different spectrum of polyphenolics than juice, consuming berries may or may not be more beneficial than juice in decreasing the incidence of UTIs in susceptible women.

The primary objectives of this study were to determine if consumption of sweetened, dried cranberries (SDC) decreases recurrent UTIs and whether this intervention would alter the heterogeneity, virulence factor (VF) profiles, or numbers of intestinal E. coli.

Twenty women with recurrent UTIs were enrolled in the trial and consumed one serving of SDC daily for two weeks.

Clinical efficacy was determined by two criteria, a decrease in the six-month UTI rates pre- and post-consumption and increased time until the first UTI since beginning the study.

Over one-half of the patients did not experience a UTI within six months of SDC consumption, and the mean UTI rate per six months decreased significantly. Kaplan-Meier analysis of infection incidence in women consuming SDC compared to patients in a previous control group showed a significant reduction in time until first UTI within six months. The heterogeneity, VF profiles, and prevalence of intestinal E. coli strains were not significantly different after cranberry consumption.

Results of this study indicate a beneficial effect from consuming SDC to reduce the number of UTIs in susceptible women. Because there were no changes in the heterogeneity or VF profiles of E. coli, additional studies are needed to determine the mechanism of action of SDC for reduction of UTIs.