Half Of Americans Sweet On Sodas

Sweeteners are hard to escape. It’s also hard to escape the health consequences of becoming overly reliant on a substance that apparently, not enough of us are yet aware is killing us slowly. 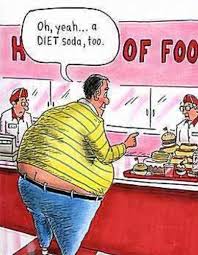 Half Of Americans Sweet On The Perils Of Sugar

According to the Centers for Disease Control and Prevention, recent statistics show half of Americans drink a soda or sugary beverage each day. We have gulped our way to a new milestone in that they include both adults and kids. So much for leading by example.

Epidemiologists from the School of Medicine at the University of Texas Health Science Center San Antonio reported data showing that diet soft drink consumption is associated with increased waist circumference.

Related studies point to the illusion of the artificial

Diet soda users as a group experienced 70% greater increase in waist circumference compared with non-users. These results suggest aspartame exposure might potentially directly contribute to increased blood glucose levels. This in turn contributes to the associations observed between diet soda consumption and diabetes in humans.

With a majority of the population being obese, diabetic and increasingly unhealthy, it’s not so funny anymore to pitch junk to children so blatantly. First it was Joe Camel getting side lined, now Burger King says they are removing the King Mascot from the Throne.

Not to worry, researchers are working on an i–phone app to use with a tattoo that monitors glucose and sodium levels. Watch for more techno-bio feedback tools to learn appropriate healthy behaviors.

Researchers at Northeastern University are working on nano sensors tattooed under the skin. The sensors change shade, red for sodium and yellow for glucose. Not ready for humans just yet, but as they say, awareness is the first step to enlightenment. Measuring for it keeps us headed in the right direction. Hopefully we’ll get the message by the time it becomes a life and death matter,

Look at the labels of any packaged or processed food product. Sweeteners are hard to escape. It’s also hard to escape the health consequences of becoming overly reliant on a substance that apparently, not enough of us are yet aware of we all know is killing us slowly.Maybe the perils of sugar will become obvious to all of us. How about we stop subsidizing GMO corn processed high fructose corn syrup.