A new survey found Riverside County residents are more likely to smoke and eat fast food than other Californians, trends that could be tied to long work commutes that leave drivers stressed and looking for cheap, easy meals. 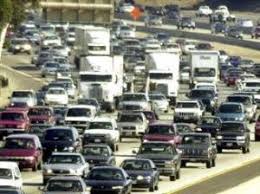 Long commutes are “a contributing factor; it’s not the one, sole factor,” said Dr. Cameron Kaiser, the county’s interim health officer. “I definitely agree it has a negative health impact.”

The 2013 Community Health Profile also found that three-fourths of children were physically active at least three days a week, although only one in four exercised an hour a day. Ninety percent of children watched two to five hours of TV on weekends.

The survey conducted by the county Department of Public Health was last done four years ago. It examines birth and death rates, the prevalence of chronic diseases and lifestyle choices affecting health. Results were delivered in an 82-page report.

Nearly 20 percent of county residents reported eating fast food four or more times a week in 2009, compared to 11 percent for the rest of California. From 2007 to 2009, the percentage of residents who ate fast food in the past week rose from 13.1 percent to 18.9 percent, the study found.

Often high in sugar and fat, fast food is associated with obesity and other health problems. The county’s higher-than-average unemployment rate also may make fast food tempting, Kaiser said. Fast food is relatively cheap, and when someone is jobless and looking to stretch a dollar, “an extra value meal goes an extra long way (and) gym memberships go out the window,” he said.

Some areas of the county are “food deserts” where the only nearby dining choices are fast food, Kaiser added.

Census figures show Riverside County residents spent an average of 32 minutes driving to work each day, the most in Southern California. “The more time you spend in your car, the heavier you get,” said Michael Osur, deputy public health director.

The percentage of residents 12 and older who smoke is also higher compared to the state average. In 2009, roughly 15 percent of residents smoked compared to 12.5 percent for the rest of the state, even though smoking rates have decreased in California since 2003.

“It is stressful, and people deal with that stress in a variety of ways” including smoking, he added.

Data from 2009 was used in some cases because the public health department relies on information from state agencies that may not be totally up to date, Kaiser said. Other parts of the study used more current information, he said.

While commuting could be a factor in the county’s higher-than-average smoking rates, demographics also play a role, said Terry Roberts, area director for the American Lung Association in California. County residents have lower incomes than people in other counties, and those on the lower end of the income scale are more likely to smoke, she said.

While she hasn’t read anything about the link between commuting and smoking, “I think that is definitely something to look at,” Roberts said. Many smoking cessation classes are during the day or early evening, so it could be harder for commuters to make those, she added.

One way county officials are trying to improve public health is through policy changes. In 2011, the Board of Supervisors added the Healthy Communities Element to the county’s General Plan, a blueprint guiding development in the county’s unincorporated areas.

The new element encourages development that builds walkable communities where people can live near where they work as well as small “pocket parks” where residents can get active near their homes, Osur said.

Besides creating healthier residents, shorter commutes also allow people to become more active in their communities, Osur said. The time they spend on the road can be devoted to leading a Little League team or other civic activity, he said.

Mark Friis, of Banning, is with the Bicycle Commuter Coalition of the Inland Empire, which seeks to promote everyday cycling. Public transit and cycling were a way of life for Friis when he lived in New York, but he admits it’s not easy for most Inland commuters to bike to work.

However, he said there are ways people can get out of their car during their daily routines and get exercise through cycling. Metrolink, for example, allows riders to get on trains with bicycles, he said.