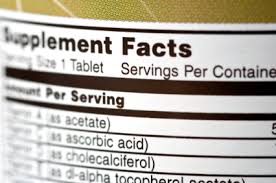 Purchasers of nutritional supplements span the range from interested first-time buyers looking for a result, to extremely savvy supplement users.You know people like them. They understand exactly what they’re buying and can tell you why they’re buying a particular supplement or nutritional formula and everything about the ingredients.

The conclusions reached by this study imply there is something deficient about nutritional supplements and that it’s chiefly because of marketing that consumers were influenced to answer the questions in this study. I’d love to see those questions.

It’s telling that the sub head for this study said purchasing decisions were by the “physically active”. How active they don’t say, but it would follow that if they were active at a competitive level, they would most definitely pay keen attention to the labels looking for banned substances.  They would also pay close attention not only to the label, but to any scientific studies that back up any claims about quality, performance or effectiveness.

The authors make the leap that any perceived or measured performance  enhancement is due to contaminants or adulterants and pointing to an opportunity to tighten up labeling requirements, communications and quality assurances.

It looks like yet another flawed study trying to make nutritional supplements look bad. The adverse effects reported in a one year term for the entire U.S. was 275, and most of those were caffeine related.

Pharmaceuticals and prescription drug deaths accounted for 37,485 fatalities in 2009 – more than all traffic accidents.

No one is talking about clamping down on those labels or the marketing that’s behind them. Pharmaceutical companies currently spend one-third of all sales revenue ($100 billion a year) on marketing their products – roughly twice what they spend on research and development.

Some of that marketing buys ads in scientific journals and editorial influence. That makes it convenient to keep nutritional studies out of many journals, giving the impression there’s no science behind the claims.

Yet somehow we’re supposed to be worried about nutrition labels? Really?

The increase in sales of nutritional supplement globally can be attributed, in part, to aggressive marketing by manufacturers, rather than because the nutritional supplements have become more effective. Furthermore, the accuracy of the labeling often goes unchallenged. Therefore, any effects of the supplement, may be due to contaminants or adulterants in these products not reflected on the label.

A self-administered questionnaire was used to determine how consumers of nutritional supplements acquired information to assist their decision-making processes, when purchasing a product. The study was approved by the University of Cape Town, Faculty of Health Sciences Human Research Ethics Committee. The questionnaire consisted of seven, closed and open-ended questions. The participants were asked to respond to the questions according to a defined list of statements. A total of 259 participants completed and returned questionnaires. The data and processing of the returned questionnaires was captured using Windows-based Microsoft? Office Excel 2003 SP 1 (Excel ? 1985?2003 Microsoft Corporation). Statistica Version 10 (copyright ? Stat Soft, Inc. 1984?2011) was used to calculate the descriptive statistics.

This study, (i) identifies short-comings in current labelling information practices, (ii) provides opportunities to improve label and non-label information and communication, and, (iii) presents the case for quality assurance laboratory ?screening testing? of declared and undeclared contaminants and/or adulterants, that could have negative consequences to the consumer.

Boost Your Brain With Lipids