Growth Turned On During Slumber

Sleep increases the reproduction of the cells that go on to form the insulating material on nerve cell projections in the brain and spinal cord known as myelin, according to an animal study published in the September 4 issue of The Journal of Neuroscience. The findings could one day lead scientists to new insights about sleep’s role in brain repair and growth.

Scientists have known for years that many genes are turned on during sleep and off during periods of wakefulness. However, it was unclear how sleep affects specific cells types, such as oligodendrocytes, which make myelin in the healthy brain and in response to injury. Much like the insulation around an electrical wire, myelin allows electrical impulses to move rapidly from one cell to the next. 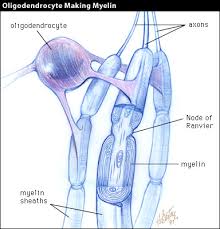 In the current study, Chiara Cirelli, MD, PhD, and colleagues at the University of Wisconsin, Madison, measured gene activity in oligodendrocytes from mice that slept or were forced to stay awake. The group found that genes promoting myelin formation were turned on during sleep. In contrast, the genes implicated in cell death and the cellular stress response were turned on when the animals stayed awake.

“These findings hint at how sleep or lack of sleep might repair or damage the brain,” said Mehdi Tafti, PhD, who studies sleep at the University of Lausanne in Switzerland and was not involved with this study.

Additional analysis revealed that the reproduction of oligodendrocyte precursor cells (OPCs) — cells that become oligodendrocytes — doubles during sleep, particularly during rapid eye movement (REM), which is associated with dreaming.

“For a long time, sleep researchers focused on how the activity of nerve cells differs when animals are awake versus when they are asleep,” Cirelli said. “Now it is clear that the way other supporting cells in the nervous system operate also changes significantly depending on whether the animal is asleep or awake.”

Additionally, Cirelli speculated the findings suggest that extreme and/or chronic sleep loss could possibly aggravate some symptoms of multiple sclerosis (MS), a disease that damages myelin. Cirelli noted that future experiments may examine whether or not an association between sleep patterns and severity of MS symptoms exists.

This research was funded by the University of Wisconsin-Madison Department of Psychiatry.

The Journal of Neuroscience is published by the Society for Neuroscience, an organization of more than 42,000 basic scientists and clinicians who study the brain and nervous system. Cirelli can be reached at ccirelli@wisc.edu. More information on myelin and multiple sclerosis can be found on BrainFacts.org.