Beekeepers are calling for a ban on pesticides that are lethal to bees. The chemicals known as neonicotinoids weaken bees’ immune systems, making them more susceptible to pathogens. Beekeepers and scientists say this could contribute to colony collapse disorder, in which all the adult honey bees in a colony suddenly disappear or die.

Commercial beekeepers and environmental organizations filed a petition Wednesday, asking federal regulators to suspend use of a pesticide they say harms honeybees.

The group is urging the U.S. Environmental Protection Agency to ban the insecticide clothianidin, one of a class of chemicals that act on the central nervous system of insects.

Over 1.25 million people also submitted comments in partnership with the organizations, calling on EPA to take action. 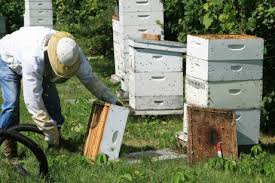 Beekeepers and some scientists say the chemicals known as neonicotinoids are lethal to bees and weaken their immune systems, making them more susceptible to pathogens. They say it could contribute to colony collapse disorder, in which all the adult honey bees in a colony suddenly disappear or die.

The disorder continues to decimate hives in the U.S. and overseas. Since it was recognized in 2006, the disease has destroyed colonies at a rate of about 30 percent a year, according to the U.S. Department of Agriculture. Before that, losses were about 15 percent a year from a variety of pests and diseases.

In response to calls for the ban on clothianidin and other neonicotinoids, the EPA is currently conducting a re-evaluation of these pesticides. France, Germany and Italy have limited or banned the use of neonicotinoids.

Bees pollinate about a third of U.S. crops.

California is the nation’s main producer of fruits and vegetables. Well over half of the bees from around the country are brought to the state at the end of February for almond pollination.

Beekeepers and environmentalists say the EPA ignored its own requirements and failed to study the impacts of clothianidin on bees. The agency granted a conditional registration to clothianidin in 2003, contingent on the submission of a field study establishing that the pesticide would have no unreasonable adverse effects on pollinators.

The field study was later submitted, but last year the agency found the study poorly designed and deficient. No other studies have been done to replace it, and the agency said pollinator field studies are limited in their utility.

The agency also said it evaluated clothianidin based on 34 scientific studies and that the chemical poses less risk to workers and wildlife than alternatives. While data show clothianidin is toxic to honeybees, the EPA says there’s no proven link to bee colony die-offs from exposure to the chemical.

Some researchers disagree. And while no one has been able to determine what causes colony collapse, most researchers point to a combination of factors, including pesticide contamination. 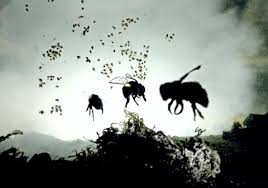 Use of clothianidin and other neonicotinoids is most worrisome, said Jim Frazier, professor of entomology at Penn State University, because the chemicals treat millions of acres of corn and other genetically modified plants throughout the U.S. Data show that the chemicals builds up over time in the soil, plants and trees, he said.

Frazier said studies have shown that clothianidin is toxic to bees. The pollen that bees take back to their colonies contains the chemical, as does the dust that comes off planters.

“The EPA admits that their testing has not been adequate to determine the impact of this chemical on bees and pollinators,” Frazier said, adding that while a direct link between clothianidin and colony collapse has not been established, more studies are needed.

Beekeeper Jeff Anderson of California Minnesota Honey Farms, a co-petitioner, said he believes clothianidin is weakening and killing his bees. Every year, he sees more bees die off when he stations them in Minnesota, especially when soy and corn treated with clothianidin are being planted.

“It’s a subtle long-term issue,” Anderson said. “It’s like giving bees AIDS. Their immune systems are down and all the pathogens and viruses become virulent. So the bees succumb much more readily.”

In recent years, Anderson said he lost over 30 percent of his bees during the winter and more during the rest of season.

Anderson, who has pollinated California’s almonds and cherries for more than 30 years, said he’s backing away from cherry pollination because the trees are sprayed with the chemical.

“They do it after we remove the bees, but the trees are retaining the chemical from one season to the next and creating a situation where the bloom is becoming toxic,” Anderson said.

Bayer CropScience recently announced the removal of almonds from the pesticide label for imidacloprid — another neonicotinoid — in California, thereby eliminating the use of the product in almond orchards, in response to concerns by the scientific community about the product’s impacts on honeybees.