Jenny Thompson of www.hsionline.com demonstrated what I think is an appropriate amount of disgust at the FDA’s Johnny Come Lately announcement banning trans fats. The mainstream media practically turned it into a Disney tale. Here we are…the poor public…trapped in a trans fat tower…and the FDA mounted its noble steed to scale the wall and come rescue us. Ridiculous! 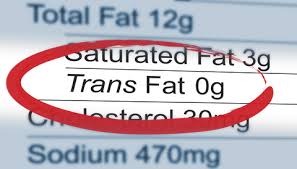 Because the FDA is exactly the evil monster that put us up in that tower to begin with. So any health risks they are tying to trans fats now — diabetes, heart attacks, all of ’em — those fall squarely on the shoulders of the FDA.

And it’s easy to see why…

A Tale Of Two Zeros

Zero. That’s the amount of trans fats the National Academy of Sciences determined was safe to eat. Zero. No gray areas there!

They arrived at that number based on evidence that even a small intake of this killer fat sharply increased risk of heart disease, sudden cardiac death, and type 2 diabetes. And this isn’t a new revelation. This was back in 2002!

But when the agency finally came around to a labeling requirement, they let food producers using trans fats lie. And basically put a gag order on companies smart enough to leave them out.

As a gift to its cronies addicted to using these dangerous fats, the FDA made a single labeling requirement: You could not say “Trans fat free.” You could only say “No Trans Fats” or “Zero Trans Fats.”

Now to the untrained eye of the trusting consumer, those would seem like the same thing.

But you’re not giving the FDA enough credit. You see, whenever you see the phrase “Zero trans fats” on product packaging, check the small print. Turns out, this almost always means “Zero trans fats PER SERVING.”

And that lead to this very convenient lie: The FDA said half a gram or less of trans fat per serving could be called “zero.”

That’s right — in the FDA’s Rock-Paper-Scissors-like World, marketing beats math. So you can use decimal points to trick people into eating something they’re trying to avoid.

But it turns out, even for the FDA, death beats (bad) math.

So in a less-than-stunning reversal, the agency charged with defending the health of Americans decided to stop helping food companies kill us…11 years too late.

Last week, the agency said that partially hydrogenated oils (the primary trans fat source) should be removed from the GRAS list.

GRAS is “generally recognized as safe.” That means it’s considered safe to eat unregulated amounts of it. And taking an ingredient off the list is a very big deal. If an ingredient isn’t GRAS, it is not supposed to be in the food supply. Period.

And that’s exactly where trans fat should have been in 2002 — OUT of our food supply.

Last year, the CDC determined that trans fat consumption had dropped by nearly 60 percent between 2000 and 2009. So let’s hold off on patting the FDA on the back. You’re no hero if you charge into the tower a decade after we climbed out ourselves.

According to documents obtained by CSPI under freedom-of-information laws, Health Canada’s own experts estimate 3,000 heart attack deaths could be prevented annually with tougher restrictions on artificial trans fats.

They also estimate that up to $450 million could be saved annually in related health-care costs and workforce productivity losses. Plus, they’re worried they’re going to get all our banned trans fat products dumped on Canadian consumers.

Maybe we’re seeing the shift in doing business as usual. Smart consumers make smart choices. If we’re smart about what we eat and what we buy, we can change the world.

We recently released the most valuable gift in our history to HSI members who renewed their membership. The response was so overwhelming, we had to let you in on the chance to get it FREE by becoming an HSI member today. For instructions to receive your free gift, click here.

Tips To Fend Off A Food Craving

Nutrition In A Bottle: Sometimes More Hype Than Help