Women don’t need to run marathons or do intense aerobics to reduce their stroke risk. Moderate-intensity exercise — such as brisk walking or playing tennis — may do the trick, according to research presented at the American Stroke Association’s International Stroke Conference 2014.

“I was surprised that moderate physical activity was most strongly associated with a reduced risk of stroke,” said Sophia Wang, Ph.D., the study’s lead author and professor in the department of population sciences within the Beckman Research Institute at the City of Hope in Duarte, Calif. “More strenuous activity such as running didn’t further reduce women’s stroke risk. Moderate activity, such as brisk walking appeared to be ideal in this scenario.”

Researchers analyzed information from the 133,479 women in the California Teachers Study to see how many suffered a stroke between 1996 and 2010. Those who reported doing moderate physical activity in the three years before enrolling in the study were 20 percent less likely than women who reported no activity to suffer a stroke. “The benefits of reducing risk of stroke were further observed among the group of women who had a sustained moderate level of physical activity over time,” she said. 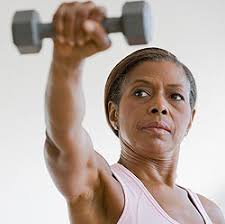 “The effects of physical activity and hormone therapy appear immediate and the benefits of physical activity are consistent in premenopausal and postmenopausal women,” Wang said. Therefore, Wang recommends that women incorporate some type of physical activity into their daily routine. “You don’t have to do an extreme boot camp. The types of activities we’re talking about are accessible to most of the population.” Power walking and recreational tennis, for example, do not necessarily require special memberships to gyms.

The study also found that women with diabetes had elevated stroke risk, although this group encompassed women who also were overweight. “Physical activity, obesity and diabetes are all highly correlated with one another,” Wang said. “Stroke prevention among diabetics is thus a particularly important scientific question to address.”

Although 87 percent of the women were white, Wang said she believes the study’s results may also apply to women in other racial/ethnic groups because the amount of stroke risk reduction was so robust. Further studies are needed to determine how much moderate exercise helps those with diabetes avoid strokes.

Author disclosures are on the abstract.