Nearly A Quarter Of U.S. Meat Infected With Antibiotic-Resistant Staph

Nearly half of meat and poultryâ€”47 percentâ€”sold at U.S. grocery stores is infected

with Staphylococcus aureusbacteria. And more than half of those bacteria are resistant to

three classes of antibiotics, according to a new study.Â 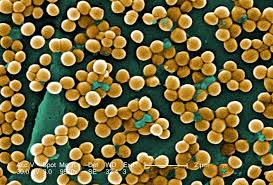 Pamela Bond,Â  of the Natural Foods Merchandiser for this story.
Related video

â€œThe fact that drug-resistant S. aureus was so prevalent, and likely came from the food animals themselves, is troubling, and demands attention to how antibiotics are used in food-animal production today,â€ said Lance B. Price, PhD, senior author of the study and Director of TGenâ€™s Center for Food Microbiology and Environmental Health, in a release.

Antibiotic use on food animals concerns health officials because this practice is contributing to the rising number of antibiotic-resistant strains of disease in humans. â€œScientists have found that the abuse of antibioticsâ€”namely the sub-therapeutic use of antibiotics to prevent illness when there is overcrowding, not the treatment of an infectionâ€”has resulted in antibiotic-resistant bacteria,â€ said Barbara Haumann, senior writer/editor for the Brattleboro, Vt-based Organic Trade Association. â€œThis means that antibiotics for use in treating human illness are becoming less effective, and, in some cases, totally ineffective. This is a serious issue.â€

The Cambridge, Mass.-based Union of Concerned Scientists has said that agricultural use accounts for 70 percent of all antibiotics used in the U.S., and this practice â€œprovides resistant bacteria with a direct route into peopleâ€™s kitchens.â€ In December 2010, the U.S. Federal Drug Administration estimated that 29 million pounds of antibiotics were sold for livestock use in 2009. In June 2010, the FDA released a policy statement recommending that agricultural uses of antibiotics should be limited to assuring animal health. According to the OTA, conventional meat producers feed animals antibiotics â€œto compensate for overcrowding and unsanitary conditionsâ€ and to promote weight gain and feed efficiency.

The U.S. government routinely surveys retail meat and poultry for four types of drug-resistant bacteria, but S. aureus is not among them, reported the study authors. The types of health problems linked to S. aureus range from mild skin infections to life-threatening diseases, such as pneumonia and blood poisoning, according to the National Institutes of Health.

What To Do At The Farm

Some meat advocacy organizations criticized the small sample size and the funding source for the study. The research was supported by The Pew Charitable Trusts as part of The Pew Campaign on Human Health and Industrial Farming, which is working to phase out the overuse of the drugs in food animal production.Â Also, the Washington, D.C.-based American Meat Institute pointed out that â€œthese bacteria are destroyed through normal cooking procedures,â€ and, thus, arenâ€™t necessarily a health risk.

â€œTheyâ€™re right,â€ said Charles Benbrook, PhD, chief scientist for the Boulder, Colo.-based The Organic Center. â€œAdequately cooking meat definitely reduces the risk of contamination.â€ However, Benbrook noted that if people arenâ€™t careful about cleaning cutting boards or the containers in which they store meat, a high-risk situation can result. â€œLetâ€™s face it, people are busy and arenâ€™t as careful as they should be,” Benbrook said. “Sometimes juices and blood get around the kitchen. Thatâ€™s where the risk is. That bacteria can hang around the fridge and get picked up by raw foods.â€ Or, letâ€™s say you touched raw meat while making a meal and failed to thoroughly clean your hands. If you then prepared your babyâ€™s bottle, the bacteria could infect the child. If this bacteria is resistant to antibiotics, any resulting sickness could be untreatable.

A long-term fix, according to Benbrook, begins on the farm. The first step is to end the creation of new antibiotic-resistant genes on livestock farms. â€œWe know how to do this: Stop using sub-therapeutic antibiotics on farms,â€ Benbrook said. To ensure that meat has been produced without antibiotics, retailers and consumers can choose products bearing the organic label, according to the OTA. These certified organic operations are federally regulated by the U.S. Department of Agriculture.

The next step is to promote animal health and reduce stress, so the animalsâ€™ immune systems can handle bacteria that are a normal part of environment. â€œConventional agriculture has gone overboard in maximizing the speed of animal growth,â€ Benbrook said. â€œSure, the animals put on a lot of fat and grow fast, but theyâ€™re not healthy, and theyâ€™re susceptible to bacteria. Whether conventional or organic, farmers have to place a higher premium on healthy animal development.â€

And the last step is to prevent cross-contamination of meat at the slaughterhouse, which can spread antibiotic-resistant bacteria.

What To Do At The Store

â€œChoosing foods bearing the organic label is the only way consumers can be sure meats and dairy products they buy have been produced without the use of antibiotics,â€ according to the OTAâ€™s position paper on the issue.

Beyond being free of antibiotics, Diana Crane, spokesperson for Seattle-based PCC Natural Markets, said that â€œorganic meats are â€˜cleanerâ€™â€”meaning free of harmful bacteriaâ€”than nonorganic meats.â€ As evidence, she pointed to a 2010 study published by Consumer Reports, which found that the store-brand organic chickens the magazine tested neverÂ had salmonella.

PCC is a certified organic retailer that sells antibiotic-free, organic beef and poultry, none of which come from CAFOs (confined animal feeding operations)â€”a situation â€œthat contributes to the need for antibiotics and the spread of infection,â€ Crane said. The store staff educate shoppers on PCC standards and practices related to raw meat sourcing through the retailerâ€™s website, monthly newspaper and in-store signage.

To take action on this issue, retailers and consumers can join PCC and other groups in their support of the Preservation of Antibiotics for Medical Treatment Act (H.R. 1549/S. 619). If passed, the PAMTA would require the FDA to review approvals for animal feed uses of seven classes of antibiotics that are viewed as important to human medicine. Approvals could be reversed for antibiotics the FDA finds are overused, resulting in antibiotic resistance.

The Benefits Of Herbs